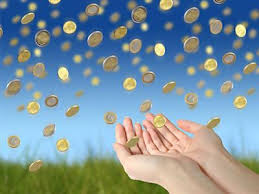 God wants you to prosper.

A statement like that is loaded with implications, many of them leaving a bad taste in our mouths. That’s because the word “prosperity” has been hijacked by hucksters and malformed into something trivial and worldly. In that takeover, prosperity has been equated to health and wealth holding out the promise that God’s will for His children is to never get sick and be financially well off. Consequently, if you find yourself with a tube running out of your arm getting intravenous chemotherapy treatments, there is something wrong with your faith.

You could point to any number of texts to debunk this kind of trash, but one that’s always stuck out to me comes from Hebrews 11:32-38:

And what more can I say? Time is too short for me to tell about Gideon, Barak, Samson, Jephthah, David, Samuel, and the prophets, who by faith conquered kingdoms,administered justice, obtained promises, shut the mouths of lions, quenched the raging of fire, escaped the edge of the sword, gained strength after being weak, became mighty in battle, and put foreign armies to flight. Women received their dead—they were raised to life again. Some men were tortured, not accepting release, so that they might gain a better resurrection, and others experienced mockings and scourgings, as well as bonds and imprisonment. They were stoned, they were sawed in two, they died by the sword, they wandered about in sheepskins, in goatskins, destitute, afflicted, and mistreated. The world was not worthy of them. They wandered in deserts and on mountains, hiding in caves and holes in the ground.

Notice how the writer of Hebrews moves seamlessly between those who were miraculously delivered from their circumstances to those who were not. They all, collectively, were marked not by their earthly end but instead by their faith. Nowhere does the writer say, “The people with real faith for their money. But those without real faith got their chains.”

And yet we find promise after promise in Scripture that God will indeed deliver His people, that His intent for them is good and hopeful and yes, even prosperous. The gospel is a message of prosperity, but it’s not the kind of pithy prosperity promised to be delivered through bank accounts and good physical fitness tests. Here, then, are three distinctions of the true prosperity gospel:

1. True prosperity has an eternal perspective.

Look back at Hebrews 11 again how the writer sums up the experience of both those who were delivered and those who were imprisoned, those who were healed and those who died: All these were approved through their faith, but they did not receive what was promised, since God had provided something better for us, so that they would not be made perfect without us (v. 39-40).

They did not receive what had been promised. None of them. Even the ones who escaped the mouths of lions and the edge of the sword. God’s promises are greater than the bounds of this earth, and He would not compromise His great love by giving a gift as temporary as earthly comfort. Instead, God has something more. We can only understand, love, and embrace the true prosperity God has for His children when we have an eternal perspective.

2. True prosperity is secured in the grace of the gospel.

One of the great heresies displayed in prosperity preaching is that you can have a flea market mentality with God – you bring your good stuff to the market and then barter with God to get some of His blessings. If you invest this much money, you’re going to get a bargain out of what He gives you in return. If you invest this much obedience, He’s going to repay it with that bonus or that good parking spot on Black Friday. You give so that God will then give to you.

This is not the gospel.

Instead, we find that the only thing we bring to the table is the sin we need to be rescued from. But God, being great in mercy, not only rescues us from our sin, but goes beyond it and gives us unimaginable blessings:

Praise the God and Father of our Lord Jesus Christ, who has blessed us in Christ with every spiritual blessing in the heavens (Eph. 1:3).

Every spiritual blessing. Every single one. They’ve all been given to us in Christ. God isn’t holding something back form us, waiting for us to write a check in order to receive it – we have been given everything in the gospel, and all this is by grace and grace alone.

3. True prosperity doesn’t use Jesus for a greater end.

Let’s say you walk up to a house but before you ring the doorbell, you notice the great beauty of the door. It’s a fantastic door; beautifully crafted, wood grain, the windows just how you like them. And it’s red, and you’ve always wanted a red door. So you admire the door… and then you ring the doorbell because you didn’t come to the house for the door; you came for what’s inside. In the end, no matter how beautiful the door is, it’s only the entryway to what’s inside. No matter how much you admire the door, you’re eventually going to use it to get somewhere else.

This is what the prosperity gospel does – it takes the greatness of Jesus and boils it down to simply the entrance point into something better. The goal is to get to that storehouse of what God is holding back – all that money and wealth and prestige. Sure, you might like the look of Jesus, but in the end you’re using Jesus to get to something else.

This is eternal life: that they may know You, the only true God, and the One You have sent—Jesus Christ (Jn. 17:3).

Jesus is the means, but Jesus is also the ends. The prosperity gospel asks you to settle for something other than the best in the cosmos, and the best is Jesus. Himself. Alone.

God wants to prosper you, but He doesn’t want you to settle for the watered-down, hucksterfied, trivial version of prosperity. He wants you to drink deeply of Himself, that which can only come through the true prosperity gospel.

[vodpod id=Groupvideo.3171196&w=425&h=350&fv=] more about “Connect Conferences“, posted with vodpod This fall I’m going to be participating in leading a series of conferences called Connect. These unique gatherings provide a focused…