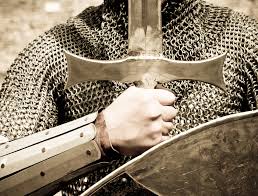 Anyone who has seriously put themselves to the task of following Jesus can testify to it. You can feel like your soul is being torn into two pieces – what you want to do and what you know you should do; what the Spirit is working in you and what your flesh is still clinging to; what your senses tell you and what you believe by faith. It’s war, and Paul knew it:

In this war that wages in our souls, we are not meant to be passive spectators but active, and armed combatants. We take our stand, by faith, and battle against our fleshly desires in order to fully give ourselves to the work of the Spirit to make us more and more like Jesus. But if there is a battle, then there are weapons. Implements that can help us in the fight. Tools at our disposal we can wield for the sake of our souls.

Of course, Paul has the definitive list of spiritual armor recorded for us in Ephesians 6. If it’s been a while since you took stock of God’s armory, then stop reading this post and head there now. Take in the words. Feel the belt of truth go around your waist and the security of righteousness on your chest. Lace up and sandals of the gospel of peace and renew your grip on the shield of faith and the sword of the spirit.

These are the weapons; this is the armor. But how do we actually employ it? This is an important question to me, and maybe to you, too. We know the armor is there, we know it is available, but there is a huge difference in having access to the equipment and actually putting it to use. It makes me think of giving a child a set of football pads and even dressing him in it. He is wearing the armor, but he doesn’t necessarily know the game.

How, then, can we put this armor to use? A host of ways, no doubt, but here are three that might be flying under your radar right now:

Music is powerful. It reaches us at a deep, deep level. It awakens our hearts and our heads; it makes us think and it makes us feel. One of the ways we put the armor of God to use, then, is through the power of music. This is what King Hezekiah did, not only for the sake of the people’s souls, but also for their very lives.

Hezekiah, facing overwhelming odds, prayed and asked the Lord for victory. The Lord answered his prayer; victory would be granted. Hezekiah had the assurance that the victory belonged to the Lord, but he did a curious thing when he went out to face the armies before him:

Then he consulted with the people and appointed some to sing for the Lord and some to praise the splendor of His holiness. When they went out in front of the armed forces, they kept singing: “Give thanks to the LORD, for His faithful love endures forever” (2 Chron. 20:21).

When we fight the battle of temptations, we can awaken ourselves to the great God and His resources that He has given to us with which to fight. Sing loudly. Sing proudly. Fight, and sing before, during, and after doing so, and feel your affection for Jesus awaken.

Think about some of the particular temptations you might face on a regular basis. Let’s say you face the temptation to criticize the leadership of the church – behind their backs, to spread rumors and gossip and whatever else. You know this is wrong; you know it runs contrary to what God’s will is for your lives, but how do you battle those prideful temptations inside you? How do you take up the spiritual weapons and fight with them in a circumstance like that?

Nothing kills pride more quickly than serving. Find the job, in this example, that no one else wants to do. The thankless work. The “diaper-changing” kind of role. Find it, and throw yourself into it, not only because the church will benefit, but as an active way to take up and fight the spiritual battle inside you.

There is a reason, I think, that gratitude is a command. Not a suggestion; not a sentiment; not to be done exclusively when things are going well. Gratitude is an issue of obedience and as such, is many times a spiritual discipline for us to practice. But actively practicing gratitude is also how we can start fighting the spiritual battle.

Let’s say, for example, that you feel the deep temptation of envy and greed. There is that one person in your life who has more, does more, receives more than you do, and you can’t seem to stop yourself from envying them. To really get in the fight, begin to practice the discipline of gratitude. Give thanks in the circumstances you find yourself in and do so as a means of actively battling that temptation.

In these ways, and many more, we can actually get in the fight. We can battle with what God has given us. We can take up these weapons for the sake of our souls and the victory Christ has already won on our behalf.

Five links to some things you might have missed, or at least ones that caught my attention this past week.