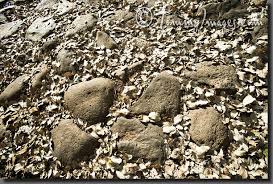 There is a pretty amazing scene recorded for us in John 8:1-11. There is a woman caught in a compromising position thrust into the light of day by a group of self-righteous religious leaders. All this to try and trap Jesus to try and bolster their ongoing case against Him.

Then we have one of those moments that the biblical authors have left to our imaginations:

Jesus stooped down and started writing on the ground with His finger (John 8:6).

What did He write? Was it a message? Was it a picture? Was it directed to the woman? Was it focused on the scribes and Pharisees? Was it just a doodle to pass the time? We don’t know, but having written whatever He wrote in the dirt, Jesus stood to His feet and offered a challenge back at the accusers:

“The one without sin among you should be the first to throw a stone at her” (John 8:7).

One by one, those intent on throwing rocks at the woman dropped them and walked away. One by one they acknowledged that they, too, were sinners and therefore could not throw rocks from their position in their glass houses. They dispersed until the only One who could rightfully pick up the rock was left standing face to face with the woman. And He chose not to pick up a rock either:

Only He was left, with the woman in the center. When Jesus stood up, He said to her, “Woman, where are they? Has no one condemned you?”

“No one, Lord” she answered.

This is our story, Christian. Yours and mine. There is an accuser before us and Jesus has disarmed Him through His death on the cross. As Paul would later say, “Who is the one who condemns? Christ Jesus is the One who died, but even more, has been raised; He also is at the right hand of God and intercedes for us” (Rom. 8:34).

Jesus, the only one who can truly throw rocks, gave His life for the ones destined to receive them, and now spends His time praying for them at the right hand of God. And yet for many of us, even if we have walked with Jesus for some time, there is another accuser that has not been disarmed in our own minds.

We find ourselves looking not at a group of religious leaders, but at ourselves in a mirror. We hold the rock. We are our own accuser.

While self-condemnation might come off as holy in our churchified contexts, the truth is that self-condemnation is more than a bad character trait; it’s sin in and of itself. There is a subtle but unmistakable pride that comes when we accuse ourselves. The logic goes like this:

Who can throw the stone?

What are we doing if we pick up the stone and aim it ourselves?

We are assuming the role of Jesus.

Here again we see the sin at the center of sin—we want to hold the place of God in our own lives. Sometimes that manifests itself in the form of outright rebellion, but other times it assumes the pride of self-condemnation. In either case, we are seeking to oust Jesus from His place on the throne.

If you find yourself in a posture of self-condemnation, and you are a believer in Jesus, don’t just put down the rock. Repent of the pride that caused you to pick it up in the first place. Acknowledge Jesus as the Lord and drop your stone like everyone else.

Time waits for no man. No matter what you do, it keeps on ticking away. In fact, you and I both are closer to death than we were whenever you…