In the early 20th century, Fort Bragg residents threw their household garbage over the cliffs above what is now Glass Beach. They discarded glass, appliances, and even cars onto the land below.

At the time, the area was owned by the Union Lumber Company, and locals referred to it as “The Dumps.” Fires were lit to reduce the size of the trash pile, as the beach began to accumulate a massive amount of rubbish.

In 1967, the North Coast Water Quality Board and city leaders closed the area and various cleanup programs were undertaken through the years to correct the damage. Over the next several decades the pounding waves cleansed the beach, wearing down the discarded glass into the small, smooth, colored trinkets that cover the beach today. As the Pacific Ocean bombarded the beach, it weathered down the trash into something beautiful: 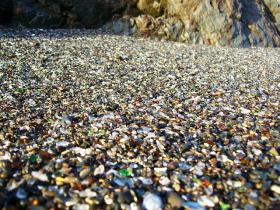 Who would have ever thought? Who would have conceived that what was discarded as trash, what was useless in the eyes of the world, what was so varied in shape, size, texture, and background, could come together to be? Pretty amazing what the combination of time and steady pressure can do to the rough edges of individual objects.

I’ve got experiences in life that remind me of this trash heap. Experiences of pain. Of loss. Of sin. Of mistakes. Experiences that I’ve dumped over the edge and lit fire to time and time again, hoping against hope that they’ll just disappear. But they’re not going to. Those experiences are embedded in my mind and heart until the day I die.

God’s not interested in making those things disappear. But He is interested in, over time, and with the constant pressure of the gospel applied again and again, making them into something different. Something astonishing. Something beautiful and new.

Redemption is real. It takes a while. But it’s real.