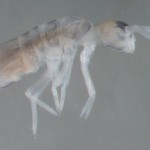 This is Plutomurus ortobalaganensis, and according to the New Scientist, it’s:

The deepest-dwelling land animal in the world has been found almost 2 kilometres underground. Fittingly, its home is Krubera-Voronja, the world’s deepest cave, whose bottommost point is 2191 metres below its mouth.The cave is located near the Black Sea in Abkhazia, a breakaway republic of Georgia.

The arthropod, known as Plutomurus ortobalaganensis, was discovered 1980 metres below the surface, where it feeds off fungi and other decaying matter.

Astounding. Marvel at the depth and reach of the creativity of God. The Divine Artist constructed this little thing and planted it more than a mile below the ground and was content, in and of Himself and His creativity, to let it sit there in a cave.

Now, having been discovered, we are reminded again today of the great extremities of the creative capacity of God.

Am I believing something that isn’t true?